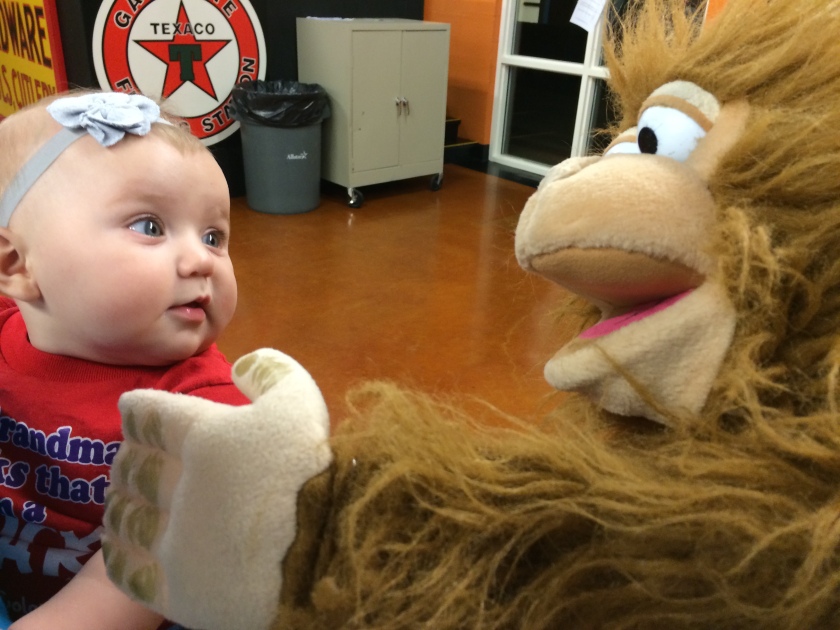 Have you ever tried to argue with a three old year old?

Probably once a month I try and argue with my three year old and, don’t laugh, but I even do this with my just recently one year old son.

Have you ever looked at a 1 year old by an outlet and said “Don’t do it” knowing full well that literally in one more second, you’ll be getting up to grab them and put in the childproof plug?

So the fun part about arguing with a kid is that a lot of times it will teach you a lesson. Like especially when they start asking “Why?”.

My daughter taught me a valuable lesson almost a year ago that I still think about from time to time.

I have, how would you say, a close “working relationship” with an orangutan named Artie that helps out in Route 252. One particular day we were filming a video for an organization, that makes character education programs for schools online. Artie was helping out with it but we also needed a kid, so Sarah brought August by to star in his first YouTube video, you can watch it here.

Afterwards Sarah and I were going to go to lunch together but before we left Lizzy wanted to talk to the famous monkey, Artie. Of course like any puppet, he needed help to carry on the conversation but the entire time Lizzy talked with him, she never looked at me. Not once.

Then she took Artie’s hand, and said, “Come play with me!”

In the spirit of fun and curiosity, Artie followed…which meant I had to as well. The entire time we talked and played she constantly made eye contact and looked directly at this little stuffed monkey.

Finally it was time to go, so Sarah and I prompted Lizzy to say goodbye to her friend. She insisted that he come with us to lunch. Sarah and I looked at each other, laughingly agreed, but then made sure to inform our daughter that he would be staying in the car at the restaurant.

10 minutes later we arrived at another crossroad.

Lizzy insisted that Artie come inside and eat with us.

And so the argument began.

“Daddy I want him to come!”

“Yeah, but really, Daddy doesn’t want to get strange looks, he needs to stay in the car, okay?”

This little two year old paused. Looked at Artie. Then back at Daddy. Then said.

Lizzy grabbed Artie, stuck him in her car seat, and hopped out to run inside.

I realized my kids and your kids have this incredible gift. They are experiencing everything for the first time. Wonder and discover define their early years and because of it they have this amazing imagination.

I think sometimes I miss opportunities to engage in it because I feel like I need to explain it. This happens all the time. The other day she let a balloon go and was sad because she lost it. I chided her, citing that it was only a balloon. Sarah explained it was going to find it’s mommy and daddy. Instantly a balloon loss was celebrated as a balloon homecoming.

In Matthew 18 Jesus told the disciples to become like “little children”. Most certainly because of context he meant by meekness and humility. But isn’t it wonderful how kids don’t need all the answers or explanations? Their sense of wonder is still intact and it allows them to imagine the wildest of possibilities.

I think when it comes to matters of faith, as both parents and the church we shouldn’t feel the need to answer every question. Let them imagine. Because honestly, on some things, you don’t have all the answers and you can’t explain everything. God is God. His ways are not our ways. His answers are not our answers. So it’s okay if you can’t explain everything and the answer is, “I don’t know.”

When it comes to my faith, honestly, I struggle. Like my pastor says “Facts are stubborn things”. I’m a doubter and an “answer needer” it can be a strength but many times I let it lead to weakness. Maybe if I engaged in my limitedness and engaged in the imagination of what God could do, I’d find out it exceeds my imagination and there’s a lot of beauty in learning to trust.